After a couple of years of cruising, he went back to New York City to further pursue the theater scene. He earned a spot as a resident actor in one of NYC’s leading theatre companies, The Flea Theater. At The Flea, Dave worked with Tony-nominated director, composer, and choreographer, Liz Swados in the world-premiere musical, THE NOMAD. Aside from theater, Dave also actively pursued the TV/film scene, appearing in lead and supporting roles in independent films and web series in New York.

He is absolutely in love with his family's Pembroke Welsh Corgi named Nala. 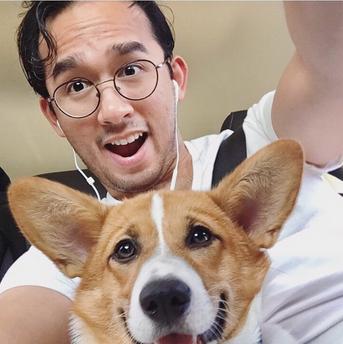 For a copy of his Theater/TV/Film résumé,

Originally from the Philippines, Dave’s family moved to New York when he was 16 years old. A son of a chief marine engineer and a nurse, Dave chose to steer away from his parents’ professional fields to pursue a career in the performing arts. He attended Wagner College in New York City, where he earned his BA in Theater Performance and Speech. At Wagner, Dave studied extensively under the tutelage of Tony Award-winning actress, Michele Pawk, who also directed Dave in shows such as RENT (playing the lead character, Tom Collins) and JESUS CHRIST SUPERSTAR (at Snug Harbor Music Hall).

It was also in his college years when Dave started to gather his thoughts and feelings into songs. Prompted by several heartbreaks and a series of bad first dates, Dave’s songs are mostly in the style of contemporary musical theater, inspired by both his own experiences and observations of his friends romantic and unromantic relationships. In 2012, he officially debuted his compositions at Wagner College Theatre’s Stage One in a song cycle entitled FAT HEART.